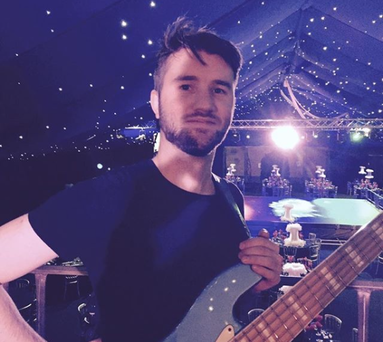 Chris Britt - Bass guitar
Christopher Britt is an accomplished piano, keyboard, guitar and bass guitar player and teacher. During his study for his Professional Musicianship degree, Christopher began playing bass guitar for bands and artists in Brighton and London.
After graduating, Christopher spent a year performing aboard cruise ships around the world traveling in the Caribbean, Alaska and Asia. On returning to the UK he set up Funky Buddha Music, a company that provides musicians for events.

Christopher also began teaching music privately and in schools and has been a busy, in-demand tutor for piano, keyboard and guitar for the last seven years. His work with schools is both 1-to-1 and group tuition, and also involves after-school group and band workshops. Additionally, he has performed in the orchestra for productions at Brighton College and Brighton Theatre Group, and has been involved in sessions and performances on BBC Radio 1, Radio 2 and Island Records.

Christopher teaches students of all ages, they make excellent progress and appreciate his kind and thoughtful teaching style. He has a 100% pass rate with the ABRSM and Trinity Rock Pop grade syllabuses. When he’s not teaching Christopher is busy playing in various professional bands and musical projects.
Connections
facebook // teaching and workshops // instagram // funkybuddhamusic.com //