20 titles
Churchill Square Dance
“Churchill Square is at the centre of the shopping area of Brighton.  It is also a terminus and important stop for the city's buses which come and go all the time.  The movement of the buses and the people made me think it could be like a dance. But it is definitely not a traditional square dance.” (Paul Busby)
Volk’s Song
Celebrates Magnus Volk (the inventor) who designed the electric railway on Brighton sea front.  He was born in Brighton to a German Clockmaker. Introduced the telephone to Brighton / 1883 - Installed electric lighting to illuminate the Pavilion / 1888 - designed a time ball in the clocktower in the heart of Brighton which rose and fell on the hour. / 1888 - Invented the first electric car (½ horse power) / 1896 - designed a special tram which ran on 4 legs at the end of which were wheels which ran on lines set into concrete, some 24 feet below the tram.
The Omnibus Edition
A tribute to the Brighton and Hove Bus company.  “One of the best, if not the best bus companies in the country” - Paul Busby. The piece depicts a bus journey - starting up, making stops, being hooted at and jostled by other traffic and eventually coming to the journey's end.
Vied AC
A Neolithic "causewayed enclosure" dating back to 3500 BC was established at Whitehawk on the hills to the east of the town. Vied Ac is one of Britain's earliest Stone Age Monuments predating Stonehenge by up to 1,000 years. The word “Whitehawk" is believed to be a corruption of "Vied Ac", the Saxon for “Holy Oak".
1514
In 1514, Brighton was razed to the ground by the French navy and only the church (St. Nicholas’s) remained unscathed.  The composer Imagined a hymn that continues throughout the piece.
A Knight At St Nicks
This refers to a legend that in the churchyard of St Nicholas (the oldest church in Brighton) there is a large stone slab. At night-time, it is said, that a knight and horse in full armour emerge from the slab and go round the churchyard.
La Mayor
The mayor of Brighton attended the first performance of the Brighton Suite hence this piece was a musical pun referencing Debussy’s La Mer which, incidentally, was completed whilst Debussy holidayed with his mistress at The Grand Hotel in Eastbourne.
Pavilion (a pavilion struck by lightning)
This piece is about the Brighton Pavilion designed with Indian and Islamic features.
The tune has an Indian style but with British colonial influence.  The building was originally a farmhouse until the Prince Regent (the future King George IV) bought it and transformed it.
1703
This was the year that a terrible storm hit Brighton. The author Daniel Defoe described it in these words:
“Stript a great many houses, turn'd up the lead of the church, overthrew two wind- mills, and laid them flat on the ground, the town in general (at the approach of daylight) looking as though it had been bombarded.” 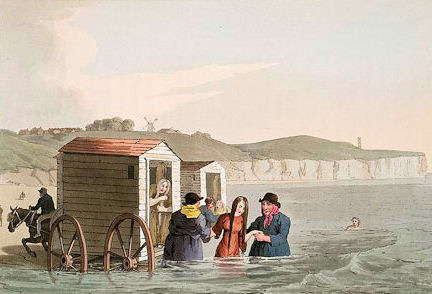 Martha Gunn
Martha (1726-1815) was the dipper, the "queen of dippers" whose job it was to dip people into the water from bathing machines. “What I want to portray then is water that is not too shallow, but not too deep. I've done this by devising a swirling bass line in the high register.”  (P.B.)
More about Martha
Absent Friends
Dedicated to various people  who have been associated with the band and who have passed away, Robert Whittle,  Dave O’Flynn, Simon de Souza and Ian Price.  A simple piece with no improvisation.
I’m Just Wild About Busby
This piece is dedicated to Sir Charles Busby and Amon Wilds.  These two architects designed much of Regency Brighton, including Brunswick Square.  The Unitarian Church was designed by Amon Wilds whose grave, incidentally, is in St. Nicholas’s Churchyard. 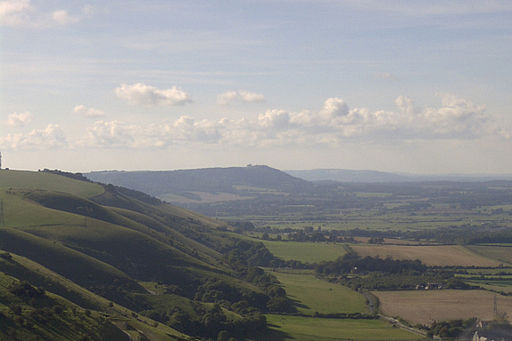 Devil's Dyke
At nearly a mile long, the Dyke valley is the longest, deepest and widest 'dry valley' in the UK.
Legend has it that the Devil dug this chasm to drown the parishioners of the Weald. On the other hand, scientists believe it was formed naturally just over 10,000 years ago in the last ice age.
With a little exploring the Dyke's story starts to reveal itself: The ramparts or walls of the Iron Age hill fort can be seen when you walk around the hill and the remains of the curious Victorian funfair can be found just a few minutes from the car park.
John Constable described the panorama from Devil’s Dyke as 'the grandest view in the world'
more about the dyke. (email: devilsdyke@nationaltrust.org.uk ) 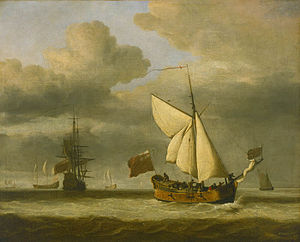 The Royal Escape
After the final defeat of the royalist cause in 1651 King Charles II travelled to Brighton, where he met Nicholas Tattersall captain of the coal-brig Surprise.  The King commissioned Tattersall to help him escape.  The captain was the only person who was to know Charles's identity, the crew were told that the passengers were merchants fleeing their creditors. The royal party set sail from Shoreham and landed at Fécamp.

Charles became fond of the brig and on his return at the Restoration in 1660, purchased her, renaming her The Royal Escape and in so doing raising her status from lowly coal-brig to HMY (His Majesty’s Yacht)​
(HMY Royal Escape painted by Willem van de Velde​)
Hove Actually

Ships That Pass In The Night