One World Orchestra 2017 - Brighton Suite
This concert was fundraiser for the band, for the Church Building Fund and for the charity Justlife Brighton which provides support to the vulnerable people living on our streets in here Brighton.
Tickets £12
Doors open 7.30 Bar run by the Unitarian Church restoration fund.

The Brighton Suite brings together 17 talented improvising musicians under the direction of Paul Nieman. The music itself has a sense of form which reflects Busby’s classical capacity to play and stretch the musical vocabulary far beyond the routine. Each piece tells a story - word painting and musical puns abound. Titles include The Omnibus Edition (about the Brighton buses), Martha Gunn (the "queen of dippers" whose job it was to dip people into the water from bathing machines) B…right-on, Churchill Square Dance, Volk’s Song, A Knight at St. Nick’s (This refers to a legend that in the churchyard of St Nicholas Church there is a large stone slab. At night-time, it is said that a knight and horse in full armour emerge to trot round the churchyard.) 1514 (In 1514, Brighton was razed to the ground by the French navy and only the church (St. Nicholas’s) remained unscathed.) 1703 (A terrible storm hit Brighton. Daniel Defoe described it in these words: “Stript a great many houses, turn'd up the lead of the church, overthrew two wind- mills, and laid them flat on the ground, the town in general (at the approach of daylight) looking as though it had been bombarded.”) The Royal Escape (King Charles II escaped to Shoreham where he boarded a ship “The Surprise” and fled to France.), Pavilion I’m Just Wild About Busby (after Wilds and Busby, architects of much of Regency Brighton - Busby also designed The Unitarian Church). 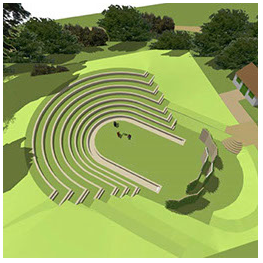 We look forward to sharing the afternoon (2pm to 4pm) with Terry Pack's Trees.
For those of you who don't know B.O.A.T. is in Brighton's Dyke Road Park with a magnificent view of the sea.
On a clear day you can see forever.
​We expect to play from 3pm to 4 and entrance is free with a collection.
( B.O.A.T. )

7.30 pm part of the Brunswick Sunday big band series.
​tickets (free) collection taken.
The Brunswick
1-3 Holland Road
Hove
BN3 1JF
Below
a handful of tracks from the first half.  Technology broke down when it came to the second half!